It's common for software platforms to consist of many deployed services that communicate with each other and connect to resources over the network. Each service can be made of one or more code projects that can reference other projects and code libraries. Code projects can be written in different programming languages running on a common runtime.

In the .Net landscape projects can be written in C#, VB.Net and F# and run on one of two runtimes, either .Net Framework (netframework) or dotnet core (netcore). Projects can reference two types of libraries, .Net Framework (netXXX) or .Net Standard (netstandardXX) which can be packaged via Nuget or as a part of the runtime.

I participated in a company hackathon just before christmas with the intention of exploring the relationships between the ~50 deployed services, code projects and databases/resources in the platform. The projects are written in either C# or VB.Net and run on either netframework or netcore. The projects reference external nuget libraries that can be built for either netstandardXX or netXXX.

The nodes and relationship information can be obtained by cloning all of a platform's code into a directory and scanning this directory with an F# console app. An example of such a platform can be seen in the dependency-visualiser-example repository.

The project, library nodes and REFERENCES relationships can be derived from the code project files (.csproj, .vbproj, fsproj). These are xml files containing information on the project references and the libraries used in the project.

An example of the relevant nodes of a netframework project file SomeProject.csproj can be seen below:

From this file we can derive the following nodes and relationships:

Each deployed project's configuration can be parsed for information on how to connect to other defined projects and resources. The lines of each config file will be matched against regular expressions to determine whether it can connect to the resource or project. These regex to resource and project mappings can be defined in a json file:

The console application is going to parse the project and config files into nodes and relationships.

To perform this task it is useful to define the domain. The project nodes can be modelled with:

The type CodeProject wraps a tuple of a string labelled name and a ProjectType which can be either NetFramework, NetCore or NotKnown at that point in the application. The DeployedProject type wraps a name and the ProjectNode can be one of either project types.

The Libraries can be modelled with:

A NugetLib contains name and version strings and a NugetPackageType which can be Framework (netXXX), Standard (netstandardXX) or Unknown. A LibraryNode can either be a NugetLib or a RuntimeLib, which wraps a string of the library name.

The last node type is a ResourceNode which wraps a string of the name:

The nodes can be either a Project, Library or Resource and can be described by the union:

There are two main types of relationships between the nodes, REFERENCES and CAN_TALK_TO. The possible start and end nodes types for each relationship are:

These can be modelled into the Relationship union:

Each case contains a tuple of the correct types for the potential start and end nodes.

The console app recursively searches a directory with all of the platform code parsing all of the project files and outputting the nodes and relationships into .csv files which can be loaded into neo4j and queried.

Neo4j is easily run in a docker container and the .csv files can be added to a mounted import folder where they will be available to import at the url file:///<filename>. An example of using docker-compose to run this setup can be seen in the repository.

With the container running the url http://localhost:7474 shows the UI and queries can be executed by connecting the web ui to the database.

The projects.csv file can import nodes with the label Project and properties name, deployed and platform with the query:

All the required data loading queries can be seen in the repository.

With all of the nodes and relationships loaded we can get a birds eye of the platform by querying for the nodes:

The query matches the first 100 nodes with any label (Project, Library or Resource) and returns the node to be displayed in the UI, which by default also shows the relationships between the nodes: 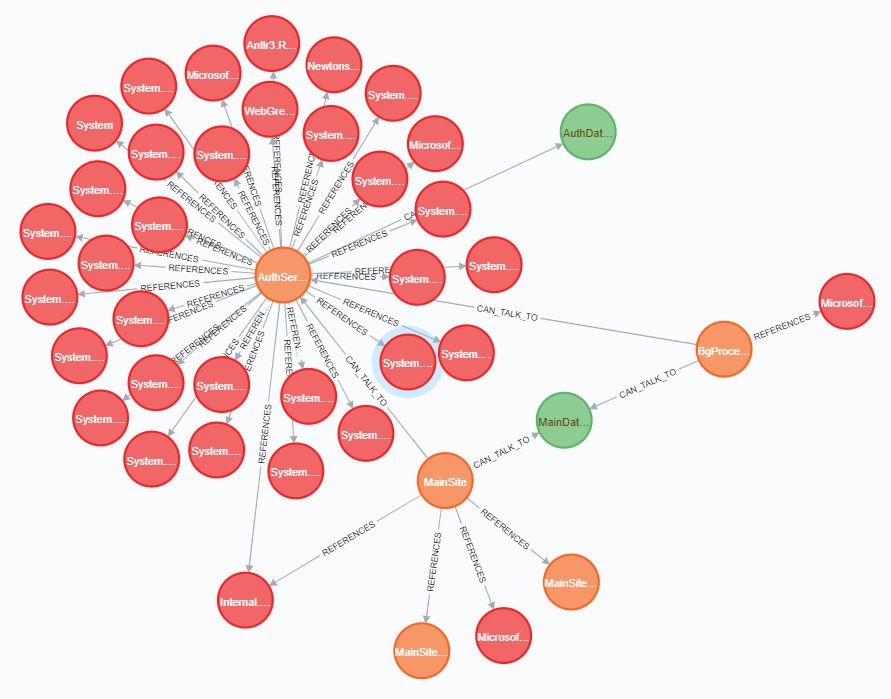 Here orange nodes are Projects, red nodes are Librarys and the green nodes are Resources. The arrows between them show the relationships REFERENCES and CAN_TALK_TO.

The graph can be queried with the MATCH keyword, desired properties of the nodes and relationships can be specified using an arrow like syntax.

This query looks for results p with the start node sn of label MatchLabel, connected by the relationship r of type RELATIONSHIP_TYPE to the end node en that has the property prop with value MatchPropValue.

Query - Projects that depend on others

To find out which projects require authentication the graph can be queried for nodes connected by the CAN_TALK_TO relationship nodes with name equal to AuthService and label Project:

It can be useful to get an a view of the libraries that projects use. If an internal library Internal.Company.Lib which targets netXXX and netstandardXX is used on the platform and a critical bug is fixed in a new version we can write a query to find the projects that consume the library:

Queries can be written to check for breaking of internal code conventions. It is quite common for code solutions to include a separate project for the domain logic with a name that ends in .Domain. It might be useful to keep domain projects free from database or http libraries, such as Dapper and Flurl.Http. It possible to check for projects that break this convention:

Running this on the dependency-visualiser-example repository shows no convention violations.

This post has shown how a .Net software platform dependencies can be modelled and analysed with F# and neo4j. This is my first experience using neo4j and i've been impressed with the intuitive nature of the query language.

The code for the console app is on github in case anyone wants to use it to analyse their platforms.

Any comments/questions/suggestions? I'd love to hear them!