This is the second post in a series on a method of automating .net library versioning. The first post described the synver dotnet tool which can be used to find the magnitude of library API changes according to the semantic versioning rules.

Semantic versioning is a popular method for versioning software libraries. It describes three different types of change that can happen in libraries, Major, Minor and Patch. To decide the type of a change in the library, from one version to the next, one needs to take into account library behaviour and API changes.

Unlike public API changes, It’s impossible to detect and verify the magnitude of changes in behaviour of code in an automated way, the responsibility of documenting behaviour changes is left to the developer.

Library changes can be described alongside the code, using a method called conventional commits. The commit message describes the magnitude of the changes using certain message prefixes.

Using this convention it is possible to derive the next version number and generate documentation from the commit messages since the last version.

An example of conventional commits can be seen in the following git log --oneline for a fictitious DSL parser:

In the example version v1.0.0 is tagged at the commit c3c552a. If a new version is at the commit c61a4b3 the commits between the two are prefixed with fix and chore and this introduces a Patch level change to produce v1.0.1. If the new version was at 88732bd then the commit history between c3c552a -> 88732bd includes feat which calls for a Minor change and produces v1.1.0. If the version were to be introduced at c00e854 the version would include a Major change commit and therefore be v2.0.0

Behavioural changes can be described in commit messages using conventional commits and API (syntactic) changes can be derived with the synver tool. Combining these methods we can automate nuget package library versioning.

We need to store the last published library version and public API to be able to determine the next version number. The version can be stored on the commit as a git tag and the public API can be stored in a text file MyProject.lson in the repository using synver’s --surface-of command. These will be updated in the repo when the package is published during the build process.

From a developer’s perspective the workflow should be:

For this to work the CI process needs to:

The version determining script in the CI process needs to:

The above steps can be implemented as part of a CI process using scripts that are located in the library repository. An example of this can be seen in the AutoSemVerLib github repository. The library contains the following powershell scripts:

The BuildAndPublish.ps1 script shows the process at a high level:

This flowchart shows the logic of the script: 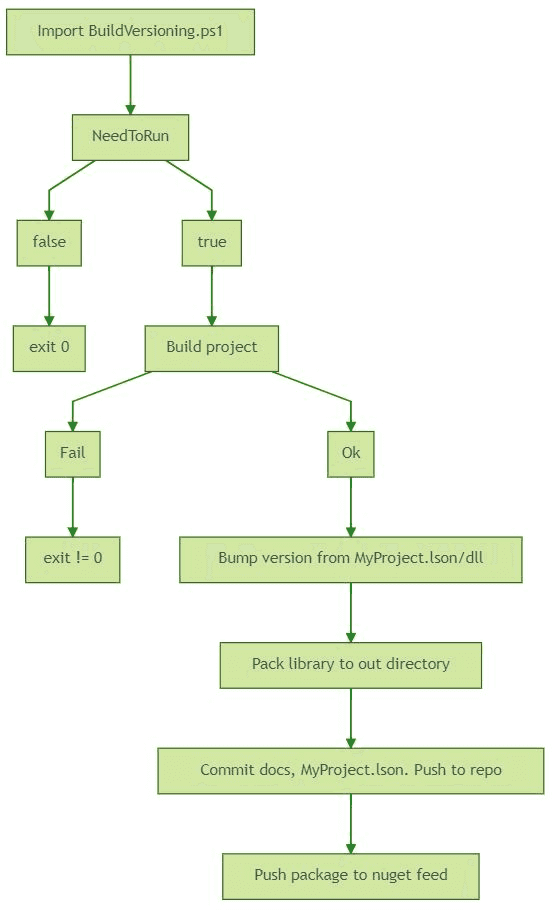 A CI technology is required to be the execution platform and a package feed is required to host the package. The next post describes the steps and code needed to achieve this with Github Actions and the GitHub Package Registry.