This is the final post in a series on a method of automating .net library versioning. The second post describes the proposed automated process. This post is best understood with familiarity of the previous ones.

These services can be used to implement a fully automated CI and publishing pipeline for a MyProject nuget package. In this process any commits pushed to the AutoSemVerLib repository’s master branch will trigger a GitHub Action to run the BuildAndPublish.ps1 script. If successful this will build MyProject and publish it to the GitHub Package Registry.

A GitHub Action is created by the inclusion of a .github/workflow/<SomeName>.yml file in the base of the GitHub hosted repository. Actions contain steps that form a pipeline, they are executed in a container of a specified os type with lots of pre-installed software. The process in AutoSemVerLib requires two executables be present, dotnet and powershell, these are present in the windows hosted runners.

A windows based pipeline BuildAndPublish that is triggered by the pushing of commits to the master branch and has a single step to checkout the code, can be defined with:

Steps can be shared in the GitHub marketplace, there are third party written steps to achieve common build/deployment tasks. To push the produced package the pipeline needs to have the nuget executable present which can be added with the warrenbuckley/[email protected] step.

The Run build and publish script step that runs the BuildAndPublish.ps1 script needs to have environment variables set to configure the execution. These are easily set with the env nodes:

The step executes the run node, which simply calls the powershell script and will fail the step if there is a non-zero exit code.

The ${{ secrets.GIT_TOKEN }} is a GitHub secret which is a Personal Access Token created with permissions to be able to push to the repository and package registry. The rest of the environment variables are required to configure the behaviour of the powershell scripts to work with the github repository.

When the Action is included in the repo, the pipeline will trigger when code is pushed to the master branch and executions can be seen in the Actions tab in the GitHub repo user interface. 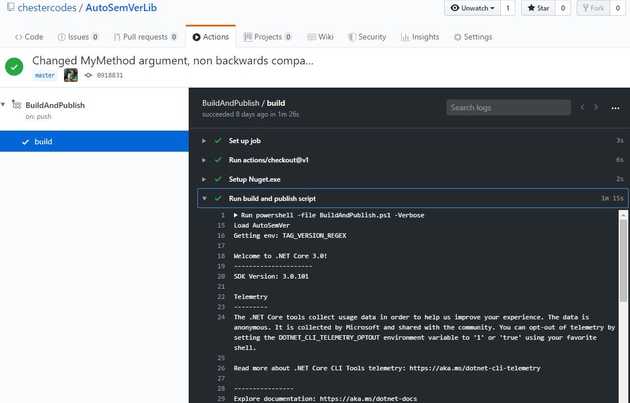 The commit produced by the chestercodes-bot after the breaking change to the API is a good example of the output of the process. It shows the increase of the version number by a major version, the new API representation stored in the MyProject.lson file and the documentation of the change in the API and the commit message in the versioning/v2.0.0.txt file.

These posts have described a way to automate nuget package versioning. A fully automated versioning process is probably not a good idea for public packages with lots of consumers, where introducing breaking changes needs to be thought about very carefully.

Automating the versioning could be useful where the version magnitude change is less important than ensuring that there’s a unique version for library builds. I have worked with a nuget feed that allowed packages to be pushed to it with existing versions when developers forgot to manually change the version. This caused a lot of confusion when trying to reason about the version of code being run in production.

A potential middle ground could be an automation step that:

This would provide a nice mixture of automation and manual checking with regards to expected next version number.